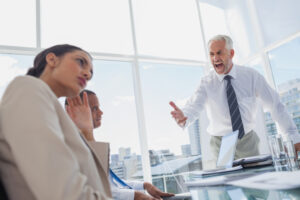 You are more than likely working for an abusive manager when a day at work can be described in any of the following terms:

With stress comes the likelihood of stress-related illness, missed time at work, depressed morale and decreased productivity. Why would a company keep a manager like this on the payroll? I have heard everything from “Look at the numbers!” which always proves to be only short-term, or “They’re so dependable!” which is baffling when put into context as the more such managers are at work, the more your workforce suffers. The most recent excuse I heard was “Today’s workforce is just too sensitive.”

Although these managers may blame others, usually they are the ones creating most of their own issues. They abuse their associates in one form or another.  It is amazing to think that abusive supervisors and managers are still around and thriving in some hotel environments. From the supervisor who yells at employees and demeans them, either privately or in front of their peers, to the executive who goes on a periodic tirade and lashes out at staff members who are organizationally less powerful. All of these examples are a detriment to your organization in the long-term.

Sometimes, though, the abuse is passive. A manager becomes angry with an employee for disagreeing and withholds information, excludes the associate from special assignments or rescinds invitations to special events. This creates a hostile work environment. However, bad behavior is not legally actionable because, in the majority of cases, discrimination is not at the heart of the abuse. It’s merely a general disagreement with an egomaniacal executive who feels justified because he or she cannot tolerate mutiny under his/her realm of power.

I am amazed at how many people I talk with have worked or still work with an abusive manager in some capacity. Still others have heard stories in hallway conversations or exit interviews. Some people even deny that these behaviors are abusive. This is business, after all, and people should not take these things personally. But this type of abuse can and does happen to people regardless of race, age or gender, and it hurts not only the associate, but the organization as a whole.

It creates a hostile work environment, damages self-esteem and makes people fearful. When associates are afraid to say what’s on their minds, to make mistakes, to share their ideas, or to tell the emperor that he has no clothes, they cannot do what’s right for the business. Ultimately, associates’ hearts are no longer aligned with the organization’s goals with the quality of work suffering and opportunities for growth missed.

When you manage hotels all over the country, how do you recognize that this behavior is taking place? Exit interviews equate to closing the barn door after you have lost your prize bull. You need to assess the status of that door before costly losses begin to affect your entire operation.

In the company for which I am proud to call home – Newport Hospitality Group – we conduct an electronic ‘On-Boarding Survey’ only 90 days after hire. We have developed 15 key questions we ask the incoming manager about his ‘On-Boarding’ experience with our company as well as 15 questions we ask associates as to their opinion of how well our incoming manager is embracing the culture and values. I have conducted these surveys with excellent results, while at other times I have been disappointed to find that the person I hired has not only refused to embrace our corporate culture but has also shown signs of being an abusive manager.

We share the results with the managers, and, where abuse has reared its ugly head, we counsel the manager in question, create an action plan and in some cases require them to attend sensitivity workshops. If we do not see a change, we must then admit that we have made a bad hiring decision and sever the business relationship. The key here is that we address indecent behavior early on – within the first three months – so that there is still time to (hopefully) course correct before bad habits solidify.

Abusive managers will only stop when we acknowledge that their behavior is wrong. So, starting today, let’s take a stand against it!

Start by calling it what it is. If you manage other managers, make it clear that such foul behavior is unacceptable and that there will be consequences. Then, give them alternative outlets for their stress and anger. Bad management/behavior may not be legally actionable and there may be no law against it, but let’s fight it anyway.